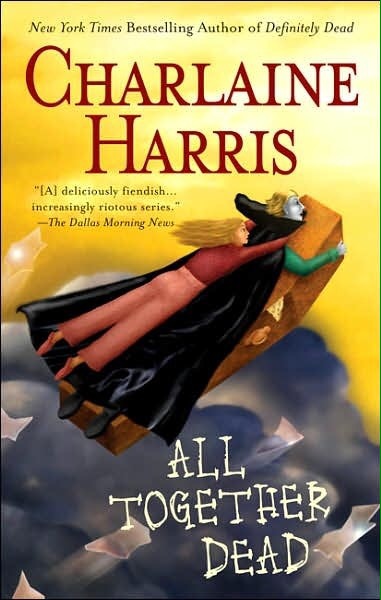 In the 7th book of the Sookie Stackhouse series, All Dead Together, authored by Charlaine Harris, Sookie finds herself beginning to get used to being surrounded by all varieties of undead, changeling, shapeshifting and other supernatural beings – but even she has her limits. She’d really like to take a while to get over being betrayed by Bill, her long-time vampire lover, and get used to her new relationship with the sexy shapeshifter Quinn – but instead, she finds herself attending the long-planned vampire summit, the destination of choice for every undead power player around, as a sort-of human ‘Geiger counter’ for Sophie-Anne Leclerq, vampire queen of Louisiana. But the job is fraught with difficulties. Sophie-Anne’s power base has been severely weakened by Hurricane Katrina, and she’s about to be put on trial during the event for murdering her king. Sookie knows the queen is innocent, but she’s hardly prepared for other shocking murders: it looks like there are some vamps who would like to finish what nature started. With secret alliances and backroom deals the order of the day – and night – Sookie must decide which side she’ll stand with, and quickly, for her choice may mean the difference between survival and all-out catastrophe.
This the 7th novel in the Sookie Stackhouse series, adds to the storyline and sheds some light on some unanswered questions, such as who the Queen of Louisianna is, and how powerful she is to Bill. Also we see what looks like some form of relationship between Eric and Sookie. Could it be that Eric truly does have feeling for Sookie other than just that of a sexual nature? The next installment should give us some idea. I rate Charlaine Harris’ novel, All Dead Together 7.5/10 stars. Suitable for anyone over 15 years of age.