It is one woman against an army of monsters. But Julie is no ordinary woman. She is one tough mother!!!

When Owen Pitt and the rest of the Monster Hunter International crew are called away to mount a month’s-long rescue mission in a monster-infested nightmare dimension, Julie Shackleford—Owen’s wife and descendant of MHI founder Bubba Shackleford—is left behind. Her task: hold down the fort and take care of her new baby son Ray. Julie’s devoted to the little guy, but the slow pace of office work and maternity leave are starting to get to her. But when a routine field call brings her face-to-face with an unspeakable evil calling itself Brother Death, she’ll get more excitement than she ever hoped for.

Julie is the Guardian of a powerful ancient artifact known as the Kamaresh Yar, and Brother Death wants it. In the wrong hands, it could destroy reality as we know it. Julie would die before giving it up.

Then Ray goes missing, taken by Brother Death. The price for his safe return: the Kamaresh Yar. If Julie doesn’t hand over the artifact it means death—or worse—for baby Ray. With no other choice left to her, Julie agrees to Brother Death’s demands. But when you’re dealing with an ancient evil, the devil is in the details.

To reclaim her son, Julie Shackleford will have to fight her way through necromantic death cults, child-stealing monsters, and worse. And she’ll have to do it all before Brother Death can unleash the Kamaresh Yar.

Only Sara knows how to access the power of the Throne – if she can find the Wisdom inside to unlock it. 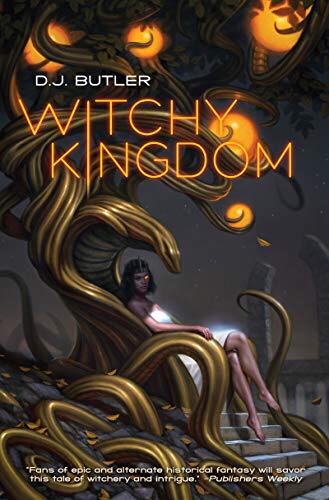 An encounter with her father’s goddess has not turned out to be the end for Sarah Elytharias Penn. Now, with the Imperial fist tightened around her city of Cahokia and the beastkind of the Heron King ravaging across the river, she must find a way to access the power of the Serpent Throne itself—a feat, she has learned, that her father never accomplished. To complicate her efforts, Cahokia’s Metropolitan, a beloved and charismatic priest who despises the goddess as a demon, returns from a long pilgrimage and attempts to finalize the Wisdom-eradicating reform that dogged Sarah’s father when he was king.

Meanwhile, Sarah’s brother Nathaniel and her brilliant but erratic servant Jacob Hop find their steps dogged by the Emperor’s Machiavel, Temple Franklin, as they hunt in New Amsterdam for the third Elytharias sibling. As Simon Sword’s destroying storm threatens from the south and west, and New Orleans is thrown into deadly turmoil when a vodoun priest and mameluke assassins contend for ultimate power and control of the Mississippi, the chance for a unified New World teeters on the brink. Sarah Penn understands she may face a hard fate in the final reckoning.